Placed on Purpose–Your Faith at Work

Taking our faith to work. How do we do it in ways other than walking up to people and asking them if they know Jesus? Actually, I would really recommend against that.

To take our faith to work…or school…or into our community, we just have to shift some attitudes and ideas on what it means to minister.

The first idea we need to change—or to simply let go of—is the idea that the only people who are seriously and truly called by God become ordained clergy-type people or go into the foreign mission field. Not only is this misguided, it’s not even Biblical.

None of these people were clergy. In fact, you have to look long and hard before you can find religious professionals in the Bible who come off looking like Godly people at all. I suppose Eli and Samuel in the Old Testament pass the test, but all of the priests and Pharisees in the New Testament tend to be part of the problem instead of the solution—and one could make a very persuasive argument that the same thing is true today.

We are all called by God into mission and ministry, but that doesn’t mean we all have to (or even should) to into the depths of Africa or Asia or take our place behind a pulpit every week to proclaim the good news.

So that’s our first new attitude. We are all called to ministry and mission. Whether we are scientists or school teachers, doctors or ditch diggers, students or stay-at-home parents. We are all out in the mission field.

The second shift we need to make is beyond the false boundaries we have set up between the sacred and the secular. Although we have done our best to make certain places holy and other spaces profane, it is all part of God’s good creation.  The water cooler is not a baptismal font, but it doesn’t mean that it isn’t sacred space.  The beauty shop is not a sanctuary, but that doesn’t hearts aren’t healed there.

Is everyone on board so far? We are all called in to ministry and mission, and every place we occupy and gather with others is sacred, God-created space.  If we are no longer merely worker bees headed to an office or a classroom, but missionaries occupying sacred space come Monday morning, that kind of changes things, doesn’t it?

What if you have been placed in your work space ON purpose and WITH a purpose? What if your work is far more about the people around you than it is about, well, you?

The Psalmist tells us that we are wonderfully formed. That God knows us inside and out. And Paul asserts to those learned Greeks that God has determined our appointed times in history.  What if the God who knows you better than you know yourself and has placed you in this time in history has also placed you in your work place for a purpose that is beyond you.  As an only child, adjusting to the idea that anything may not be about me is not an easy task. But I’m willing to make the shift if you are.

If we are called to ministry and mission, if our boardrooms and classrooms and playgrounds and workshops are all sacred space, and if our work is far more about the people around us than it is about us as individuals, how then do we live out our faith and our purpose at work?

We sit in church and claim to believe in a God who listens to our prayers, but do we pray for the people with whom we work?

Do the people we work with know we are Christians, not because of a decal on our car, but (as the song says) by our love?

May we begin to make these shifts in our ideas and attitudes about what ministry looks like. May we joyfully claim that we are all called by God to mission and ministry. May we see our offices and classrooms and boardrooms and playgrounds as sacred space.  And may the work we are called to do not simply be about us and what we achieve, but about how we might serve those around us and help them become all that God intends.

Rev. Anne Russ is an ordained pastor in the Presbyterian Church (USA), currently based in New York City. Doubting Believer is an online, inclusive and progressive Christian community. Follow us on Facebook and get emails to keep up with all that is happening.

10 Ways to be Your Pastor’s Favorite

It’s a Nice Song, but It’s Hard to Sing 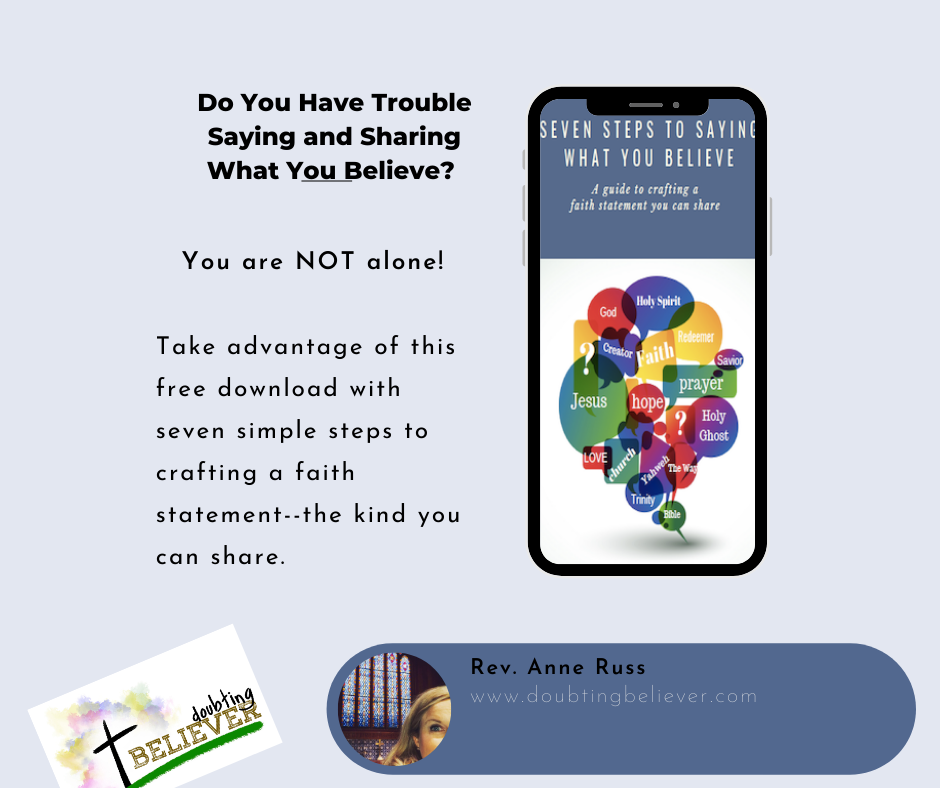