Are you saved? Of course the answer anyone asking that question wants to hear is “yes!” Or maybe they don’t. Maybe the kind of people who ask other people that question are just dying to hear a “no” so that they can be the ones to turn it in to a “yes.”

Several of my friends always answers that question with “2000 years ago.” A few others always say, “over and over and over ever day.” And of course our own David Murray always gives a hearty, “Hell, yeah!” whenever asked that question.

Our passage today is part of a conversation that Jesus is having with a man named Nicodemus who wants to know more about what this Jesus is talking about. He recognizes that Jesus is a man from God, and Nicodemus wants to make sure that he is on the right path. The path to salvation.

The most well-known, oft-quoted and football game displayed scripture is part of our lectionary reading today. For God so loved the world that he gave his only begotten son that whosoever believes in him shall not perish but live everlasting life. Everyone in the US, Christian or not, knows that passage—or at least recognizes the reference. But the passage that directly follows it is rarely included: For he came, not to condemn the world, but to save it.

So how does that work? Jesus does not come to condemn the world, but those who don’t believe are already condemned? Because it stands to reason that if all who believe shall not perish, but live everlasting life, all who don’t believe DO perish? But Jesus came to save and not condemn? Hmmmm……

And really? Believing? That’s the bar. Okay, I believe in Jesus Christ. There. I believe. But what does that mean for me and for you and for us—other than a ticket into heaven? Surely there has to be more to it than that.

While I still heartily maintain that it would be far more valuable for future pastors to learn basic carpentry, plumbing and electrical rather than Greek and Hebrew, this may be one of those times when looking at the original language can help. A variation of the Greek word pistos is used five times in the passage. It generally gets translated as “belief,” but it can also mean “trust.” Listen to the passage with that translation.

For God so loved the world that he gave his only Son, so that everyone who trusts in him may not perish but have everlasting life. Indeed, God did not send the Son into the world to judge the world, but in order that the world might be saved through him. Those who trust in him are not condemned; but those who do not trust are condemned already, because they have not trusted in the name of the only Son of God.

When you move from belief to trust in that translation, you move from talking about what could be a one-time thing, to a life long thing. Not just believing that you’ll one day get to heaven, but trusting in what God has done for us through Jesus Christ all along the way.

But what about judgment? Christians do so seem to love to talk about judgment. So here is the judgment. Jesus even says those words—here is the judgment: light has come into the world and the people have loved darkness more than the light. Could it be that we orchestrate our own undoing by refusing to turn toward the light? By refusing to walk in the light of Christ, and choosing to remain in darkness. What if the judgment is not eternal damnation in the afterlife, but being stuck in the dark in this one?

Some of you may think, so what? I’m not afraid of the dark. Being in the dark isn’t so bad. It actually has its advantages, doesn’t it? In the dark, people can’t see who you really are and you can’t see them, either. In the dark, it’s easier to hide than it is out in the light.

If you haven’t caught any of the episodes of the Netflix show The Unbreakable Kimmy Schmidt, I recommend it. The highly contrived premise of the show is that that Kimmy was kidnapped at age 15 and forced to live underground with three other women who were all told by a cult leader that the world above them had been destroyed at that they were the only ones left. They are rescued just shy of Kimmy’s thirtieth birthday and dubbed “the mole women” by the media.

While the other women choose to remain in the small town in Indiana where they had been held captive, Kimmy decided to stay in New York following an interview on the Today show. Just imagine a 30-year-old woman hitting a big city with all the life experiences and education of a 15-year-old. While there are the inevitable frustrations and setbacks, the appeal of Kimmy Schmidt is that she experiences everything with a sense of wonder and appreciation and joy. She wears bright clothes and thinks her crummy apartment is a palace and believes that everyone she meets is someone who can be trusted (although several episodes in, she’s getting over that one). She’s just completely, well…her. The whole show is an allegory about what it means to go from living in the dark to walking in the light.

Because walking in the light is SO much better than hiding out in the dark. Because walking in the light doesn’t mean that we’ve become perfect and that everything is alright, it means that we’re willing to be seen as who we really are—warts and all. Because we know that our acceptance isn’t based on our performance or our appearance or our knowledge, but on God’s love for us. The light of Christ isn’t like some spotlight that one would use in an interrogation room that causes shame and makes us sweat. But a light that illuminates the world and makes it a brighter place to be.

Belief and salvation are not a now and later kind of thing. You don’t believe now so that you will be saved later. You believe and trust now so that you can saved right now. So that you can be living into the light of God’s kingdom today, instead of waiting in the dark until you die. 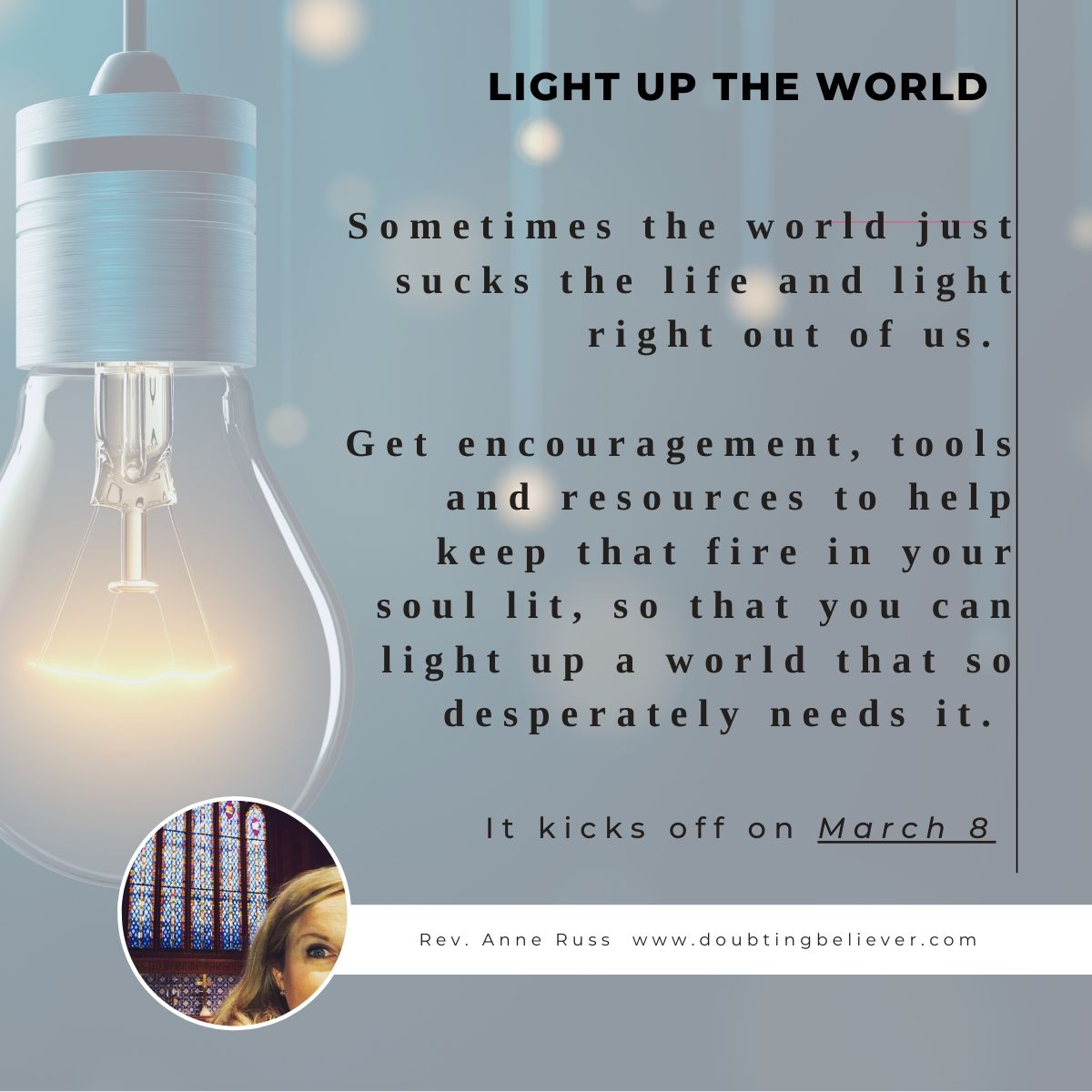